I love to do custom orders.
Some of my favorite creations have started in the form of a “can you make this for me?” request.  I’ve made aprons, custom bibs, personalized girls dresses, matching shirts for a ladies shopping trip, all sorts of custom birthday shirts, and the list goes on.
But, I think one project will always stand out as a favorite of mine: sweatbands.  Twelve sweatbands for twelve boys attending an ‘extreme sports’ birthday party.  Each sweatband I personalized with a different name. What a cool party favor, right?  I was sort of tempted to make one for myself!
I think these turned out super fun!
Happy Birthday Huck! 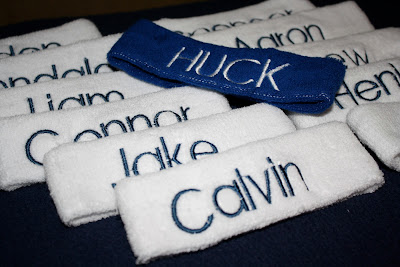 Posted by HankOrange at 8:17 PM No comments:

I think HankOrange has a decent track record with happy customers.  I try to listen to ‘clients’ and create exactly what they want and do so in a timely manner.  I aim to please.
I do, however, have one VERY tough client.  His name is Henry.  He is my son.   The kid doesn’t like anything I make for him.  We have had countless ‘disputes’ over him wearing something I’ve made for him. Why do I bother arguing with a three year old?
I can’t count the number of times I’ve heard him say “I NOT LIKE THAT.”  I’ve gotten to the point that I almost count on him saying it.  Fine Henry!  Be that way!  Other people like what I make and I don’t care if you do!  But, lets be honest, I do care.  I probably care too much.  I let a three-year-old dictate whether or not my creations are a success.
I had basically given up on ever getting him to willingly wear something I’ve made.  Until now!   Monster shirts!  Who knew?  He loves the monster shirts!
You can imagine my excitement when I started working on the monster shirts and, when little-mister-critic saw what I was working on, he said “Mommy I want one!  I want a monster shirt!”  I almost fell out of my chair.  I honestly thought he wouldn’t wear it, that tomorrow he’d have a different opinion of the shirt and want nothing to do with it.
I was wrong.  He loves it!  L-O-V-E-S his monster shirt!  Might even become (dare I jinx myself?) his new favorite shirt! 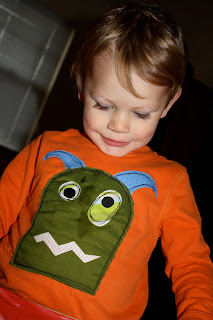 Posted by HankOrange at 8:14 PM No comments:

HankOrange is featured on blog!  But, not just any blog.  In Through The Outdoor blog!

Kisha (the mastermind behind this blog) is a friend, a mother, and totally real and honest on her blog.  She is also unbelievably complimentary of HankOrange!

In her words, Kisha describes her blog as "More than just a mommy blog, In Through The Out Door is the go-to website for anyone looking for fun giveaways, product reviews, humor writing, beauty tips, and parenting advice...there is something for everyone at kishafloren.com"

Not only does 'In Through The Out Door' feature HankOrange, but together we are doing a give-away.  AND,  Kisha is sweetening it up a bit by adding a $25 gift card to the winner!  Check it out!
Posted by HankOrange at 8:30 PM No comments:

Most of my ‘working hours’ come after my little man is in bed at night.  Some nights I get a lot accomplished, and other nights I just veg and think about all the things I should be getting accomplished!  I probably have the latter type of nights more often than I’d like to admit, but it is during those ‘thinking’ times that I come up with new ideas.
This ‘peace and love’ idea was born that way. 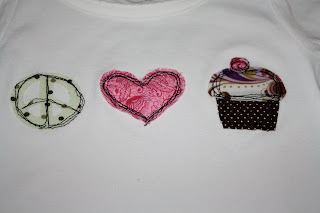 It started with a simple heart shape.  I am a big fan of the saying “live, love, laugh,” in fact, I sign many of my personal letters “love and laughter” which I think is a good summary of who I am: lots of love and I love to laugh!  But ‘laughter’ isn’t really a shape that I can cut out of fabric.  So I thought about other things I like, and, for anyone who really knows me, they know I have a love (well, ‘addiction’ might be a better description!) for sweets!   Cupcake was a simple shape I could make.  But, two shapes didn’t look quite right, so I added the ‘peace’ sign and the “Peace, Love, Sweets” shirt was born!
Simple things is life, right?!
I’m actually really pleased with the way it turned out!  I’m hoping others like it as much as I do.  I just might have to come up with other ‘sweets’ to create as well... ice cream and cakes might be soon to follow!
Posted by HankOrange at 8:37 PM No comments:

Hi, my name is Amy and I'm addicted to fabric.
Fabric makes me happy.  Walking into a fabric store and seeing bolts of fabric lined wall-to-wall has a strange effect on me.  I feel like myself.  I feel refreshed.  I feel calm.  Sometimes I feel overwhelmed by the rows and rows of brilliant colors with all sorts of shapes and designs and patterns.  It is a good overwhelmed; an excited overwhelmed; a ‘bring-it-on-and-let-me-get-creative’ overwhelmed.
I could spend hours looking at and feeling the fabrics and dreaming up all the things I could create with the beautiful colors and textures before me.
I have a hard time walking out of a fabric store empty handed (unless, of course, that fabric store is a big ‘box’ store where the line is always long and the customer service is less than mediocre…okay, off the soap box now!)
I realize I have an addiction.  I am addicted to fabric.  This isn’t a necessarily a bad thing.  My love for fabric has allowed me to sew beautiful things for others and myself.  It has allowed me to use my imagination to combine various patterns and shapes and textures to create new things.  It has allowed me to have an ‘escape’ from the realities of the day and get ‘lost’ in using my creative side.
My addiction has also, however, created an abundance of  “this will be great for something” fabrics that I buy and keep piling up.  I have a vast assortment of colors and designs in my ‘collection’ to choose from when I start something new.  I have piles of scrapes of all shapes and sizes.
I could sew for months (if only I’d be so lucky to have so much free time!) with the fabric I have!
This is both good and bad.  Inevitably, I start a project intending to use a particular fabric, I discover I don’t have enough to make what I would like, and I head off to the fabric store to buy more.  To add to my collection.  To feed my addiction.  To allow myself, once again, to take a small break from reality and get lost in the land of fabric.
Posted by HankOrange at 7:07 AM No comments:

Free-Style Sewing- Think Outside the Lines

I had the opportunity to take a sewing class this past Saturday.  I was probably a little too excited to spend five hours with my sewing machine.
I figured, why not?  At the very least I will learn something new.  When Saturday morning arrived, I packed up my machine (and a long list of other supplies required for the class) and headed off to class.
I wasn’t sure what to expect.  I was a little nervous, a little giddy about getting a day to myself to sew, and excited about learning a new sewing technique that I would hopefully be able to incorporate into new HankOrange designs.
I figured I’d be one of the youngest, which I was.  I think all other 8 ladies there have been sewing longer than I’ve been alive!  But we sure had fun together in class.
Now, I can be a bit of a perfectionist when it comes to sewing.  I want my stitches to be even, my lines to be straight, my fabric to be smooth, and edges to be finished.  The class was all about NOT doing those things.  'Free-style’ stitching, breaking free and sewing ‘outside the box.’  I like it.
The ‘free-style’ technique uses a special foot to allow you to freely move your fabric (or whatever media you are sewing on). No need for a seam ripper if your line isn’t perfect or you ‘go outside the line.’  This is all part of the free-style technique!
This is unlike any type of sewing I’ve done before, but now that I’ve done it, I keep thinking of different ideas and designs that I can do.  I tried out a little bird on a burp cloth and I LOVE the way it turned out!  I’m seeing lots of free-style stitching in the future for HankOrange!  Let the creativity begin!
Posted by HankOrange at 4:11 PM 1 comment: